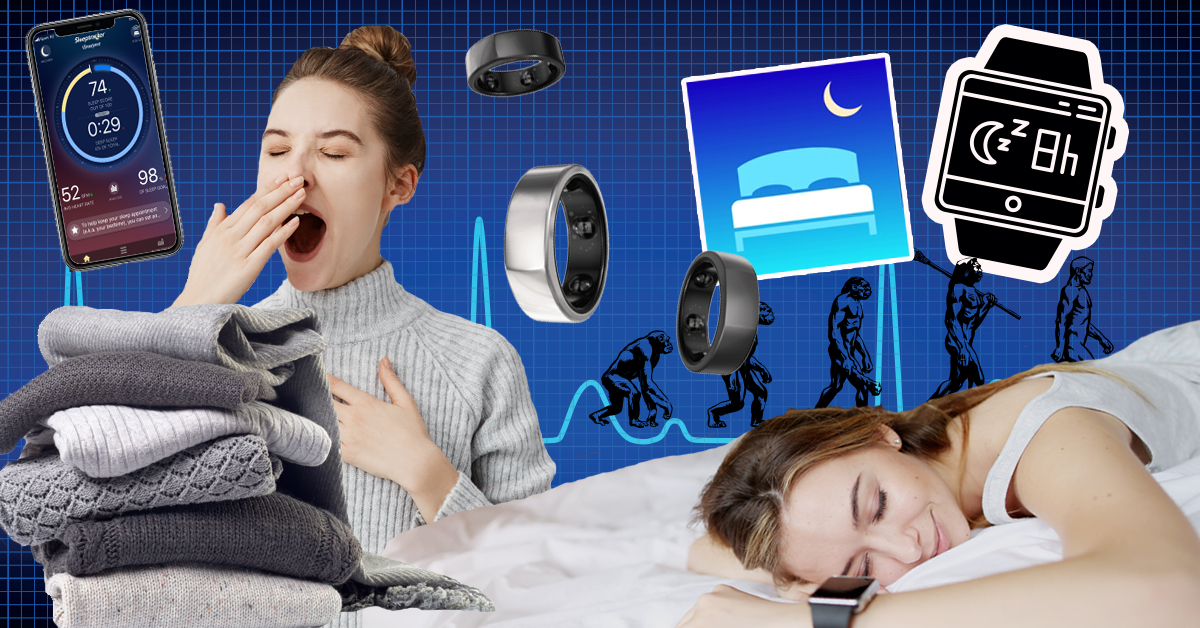 Ever since we homosapiens started settling down in caves, nestling beside a warm fire or settling down for the night under a leafy blanket, we’ve worried about our sleep.

But back 300,000 years ago,our anxieties were well founded. I mean, what happened if you rolled over and your buffalo hide onesie suddenly caught alight or a Saber-toothed tiger decided he wanted his underground lair back at 3am?

In 2020, the ramifications aren’t quite so drastic but we’re just as anxious. A bad night’s sleep sees you drag yourself into the office feeling like you’ve just spent the entire night in a Guantanamo Bay cell with Thunderstruck being piped through speakers at 78 speed. Sleep deprivation by any other name is a form of torture – BC, AC or even ACDC.

Technology is a double-edged sword. It’s responsible for keeping us awake at night when we’re in bed reading emails but it’s also driving the myriad of gadgets and sleep aids which flood the market claiming to help you sleep. There’s even a term for this wave of products – the exhaustion economy.

Oh, I see what you’re doing technology – sell us the problem, then magically find us a solution!

Or, as Warden Norton says, am I being (pause for dramatic effect) obtuse? So, we assembled a crack team of testers in our office this month to trial a few of these sleep gadgets that take your $$$ for more zzz. We want to know if there’s any scientific basis behind them which can help you sleep aside from reading your IOS user agreement just before lights out.

Each morning I get pinged my sleep report from a Beautyrest Sleeptracker – it tells me my heart rate during the night, my average breaths, when I was in REM sleep, when I was just light sleeping and when I hit  the good stuff – deep sleep. It even lets me know when I got up to pee.

Then it turns all this data into a sleep score.

So far for 2020 my results look pretty meh! I’m an Average Joe, a B-grade student – weekends are the best, mondays the worst – well duh! The tracker is strategically placed under the mattress in line with your pillow then connected to your WiFi. It’s approximately $250 for two trackers so you and your other half can duke it out for the best night’s sleep.

I found the data helpful for seeing what kind of sleep I got each night but it’s fairly self intuitive – sleep score or not – you generally know if you had a bad night’s sleep versus a good one. I tried the technology alongside my Samsung Gear.  The watch isn’t nearly as accurate as the Beautyrest Sleeptracker. I spent the weekend binge watching Netflix and my watch thought I was asleep & to be fair – during The Hobbit dinner scene I did nod off for god knows how long.

Which segues nicely to the Oura Ring. Our testers advice – throw this precious back. But at nearly $800 each – maybe hold on to it and use the ring as an expensive talking piece at your next book club meeting.

Oura boldly claims to be the ‘most accurate sleep and activity tracker’. Our testers were all a little underwhelmed with the results. One of them is a stylish 30 something who loves a good website and she might be the first to admit – was a bit in love with Oura’s marketing. She has tiny hands and struggled with even the smallest sized ring – complaining of the strange bumpy bits that are the Oura’s technology.

It’s a circle of sensors, infrared LEDS, 3D Accelerometers and gyroscopes. Is Einstein himself inside this device? The data can be a bit hit or miss according to our 30-something. She got one of those ‘You got this!’ messages on her phone from Oura telling her she’d had a great day of exercise when she had in fact been eating smashed avocado and reading the Property Press in a Ponsonby Road cafe.

Looking at her now, typing up all her hopes and dreams in the office, I see the only remnants of the Oura is a white tan line on her ring finger where the best tracker EVER used to live. You had this!

So on to our very left-brain accountant in the office, who approached this task with all the wonder and gusto of opening a fresh numberless spreadsheet on April 1st.

He reckons the accuracy of Oura was questionable and “once the novelty fades of seeing the data,  it is not all that useful actually.” Accountants – never ones to sugar coat feedback.

This obsession with keeping track on your sleep data has morphed into something now known as orthosomnia. That is, a condition used for people who become preoccupied with improving their wearable sleep data.

I wonder if  there is a condition for people who work in the sleep industry not being able to fall asleep because their work entails getting people to sleep? I suspect it’s called irony.

When someone first mentioned these, my thoughts went straight to pre-duvet times circa 1980s. You remember those heavy tartan wool blankets that your nana would tuck into your bed and top with a frayed pink Chenille bedspread?  It wasn’t sheep you were counting, but the number of blankets that she’d managed to pile on the bed that were one layer shy of cutting off your blood circulation.

The 2020 version is actually a thing called a weighted blanket, a blanket that contains glass beads or plastic pallets and has been credited with helping kids with ADHD and calming those with stress and anxiety issues.

There were limited takers in the office for one of these heavy, weighty blankets – given that most of us were struggling in 28 ℃ to sleep at night in a stiflingly hot summer.

Our office tester  is Gen Z so she rides a scooter to work and says ‘OK boomer’ to everyone who’s older than 30. But she is the most open to new technology, works in product design and has eternal optimist written all over her.

“OK (boomer) honestly? I just thought it was a bit ….weird.” Her 8kg version got a few nights before it was relegated to the couch – and get this – even after an all-night party at Gen Z’s home – none of her fellow hungover 20 somethings wanted a bar of the weighted or gravity blanket. They preferred to lie on the couch in fetal position.

Here’s what they were missing out on. The pressure from the blanket works in a similar way to deep touch pressure therapy (DTP) – supposedly the pressure from the blanket releases serotonin to the brain – the happy chemical. The effects of this may be entirely reversed when you realise you just spend $150 on a blanket that feels like a heavy straight jacket. Also doesn’t serotonin get released into the brain when you eat chocolate, laugh with friends, watch a good movie or play with a puppy? These options seem cheaper and less hassle. But then a whole new range of blankies wouldn’t be out there ‘crushing it’ in the exhaustion economy. Damn you nana! Opportunity missed.